The history of slot racing

Although the origins of electric model cars can be traced back to the turn of the 20th century, it is generally accepted that slot car racing is a direct descendent of rail racing, which was popular from the mid to late 1950s.

D.J. Laidlaw-Dickson, editor of Model Maker magazine, credits Geoffrey Deason as the founder of rail-racing, which led directly to slot racing as we know it today.   Deason wrote an article for Model Maker in 1948, suggesting that battery-driven cars could be raced on small indoor tracks guided by wooden rails. The idea appears to have been an adaptation of the king-size outdoor tracks long used in England and the USA (where they originated) for racing diesel and gasoline engine cars. These big cars, built to a scale of 1/18th to 1/16th, ran largely uncontrolled on sprawling tracks, held on a rail by a pair of spool-shaped devices known as ‘zonkers’.

Late in 1954, one reader wrote to Model Maker to say that he had installed an electric motor in a wind-up toy car that ran on a slightly raised rail, from which it picked up current. A second rail, flush with the track surface, provided the negative current. Brass shim-stock was used for pick-ups beneath the chassis and a rheostat controlled the speed. A single shoe-type guide, attached to the chassis, guided the car along the raised rail but allowed it to slide and even leave the track if driven too quickly.

Refining the theme using electric train motors and 12 volt car batteries for power, a group of British hobbyists from the Southport Model Engineering Society built a six-lane track with a 60 ft. lap length. The guide-rail was made using model train track. In the same year, the Southport club held i’s first Grand Prix, with some 30 cars entered.  This event was reported in detail in Model Maker magazine and table-top racing took off in England in a big way. Early in 1955, a group in Kalamazoo, Michigan, formed the Model Automobile Racing Association (MARA) and built a track and cars to conform to the ‘Southport Standards’. In 1956, MARA mailed four cars to Southport, to be raced by proxy in the Southport Grand Prix. The cars took second and fourth place in the event, the first officially recorded ‘proxy race’.

The Rise, Fall and Re-emergence of Slot Racing

Slot racing systems started to become popular in 1957, when a small British company, Minimodels Ltd, unveiled a commercially available slot car home racing system at the Harrogate toy fair, under the product name Scalextric (Scalex – electric).   Having a recessed slot with electrical contacts on either side, the system looked far more realistic than the protruding rails of the rail racing tracks.  Orders flooded in, outstripping the company’s production capacity so much, that in November 1958 Minimodels sold out to the Triang group, a company with larger resources.  Triang quickly introduced many improvements and additions; the variable speed hand throttle replacing the original ‘dapper’ type controller and the track was changed from rubber to polyethylene.

Scalextric proved immensely successful both in Britain and abroad, and other manufacturers soon climbed on the bandwagon. Within a short space of time, British companies such as VIP, Wrenn, SRM and Airfix introduced their own slot racing systems and in America, manufacturers such as Aurora, Strombecker, A.C. Gilbert and Eldon produced theirs.  In Europe, manufacturers included Miniamil, Circuit 24 and Jouef in France, and Faller, Fleischman and Carrera in Germany.

By 1963/64, slot racing had become so popular that it fast became big business. You had Grand Prix World Champion racing driver Jim Clark appearing in advertisements for Scalextric, while Jouef had Alain Delon and Aurora featured Stirling Moss. During this period, Aurora sold some 2 million slot racing sets and over 12 million cars.

The hobby side of the industry was also booming, with the first national association, ECRA (the Electric Car Racing Association), being formed in Britain in 1961. At the end of that year, Revell came out with the first mass-produced low-price, high-quality slot racing car kit, soon followed by Monogram, K&B, MPC, AMT, Cox, Atlas and others. The Japanese toy and hobby manufacturers were quick to follow suite, with companies such as Tamiya, Tokyo Plamo, Marusan, etc. producing cars and sets.

The popularity of the hobby was fuelled by the amazing growth of commercial raceway centres, particularly in the USA. The first raceways sprung up around 1961 (in either California, Texas or Chicago, depending on who tells the story). The race was on, and new owners soon opened up luxurious slot car racing emporiums, some of them featuring up to seven professionally-manufactured 8-lane tracks, some over 100 meters (300 ft) long, with 80-degree banked corners at the end of 17 meter (50 ft.) straights. By 1966, there were more than 3,000 commercial raceways in the United States and over 200 in Europe. They sold the latest cars, controllers and parts to hordes of enthusiasts, resulting in the slot racing industry generating annual sales in excess of $500 million for three years in a row.

In addition to established hobby brands such as Revell, Monogram and Cox, more specialised companies like Russkit, Dynamic, Classic, Champion and Mura emerged to ride the crest of the wave and gave rise to professional slot car racing. In the United States, the American Model Car Racing Congress announced a contest with $100,000 in prizes, and Strombecker organised a nationwide contest for young drivers, with the grand prize being a trip to Paris. In Paris, meanwhile, a major competition at the Palais Berlitz racing centre in 1966 attracted an incredible 10,240 drivers, all vying for the first prize of a real Matra Jet sports car.

Slot racing at commercial centres had reached its pinnacle in 1966. As early as 1967, the bubble began to burst. It had become a veritable arms race, with cars becoming increasingly sophisticated – and expensive. Manufacturers formed their own factory teams, finding the best young drivers and sponsoring them in the big races. An over-the-counter car was no longer competitive, since you now had to rewind the motor, design and build your own chassis using brass tube and piano wire, and spend hours tuning and testing.

As a result of the escalating cost and competition, it was becoming impossible to compete with the sponsored drivers and youngsters deserted the commercial raceways in droves. By 1969, there were only 50 commercial raceways left in the United States.

Fortunately, many slot racing clubs around the world survived and Scalextric continued to produce home racing sets and cars, but the halcyon days of the mid 1960s had slipped into oblivion.

The early 1990s saw the beginning of a revival, particularly in home set racing, mainly due to a new Spanish manufacturer, Ninco, who began producing cars and later sets of far superior quality than the Scalextric offerings at the time, which had started to take on a ‘toy-ish’ feel.  By the mid 1990s another Spanish manufacturer, Fly Model Car, upped the game even further when they introduced cars with an exceptional level of detail. This impetus gave rise to a mini-boom in commercial raceway centres, particularly in the USA.  On the home racing front, the hobby is currently experiencing good growth, with Scalextric again producing top quality and innovative products, along with Carrera, SCX, and a host of smaller manufacturers all producing excellent models, the most notable being Italy’s Slot.it and NSR.

A brief history of slot racing in South Africa

Slot racing in South Africa became popular with the introduction of Scalextric and in the early 1960s a large number of ‘Scalextric’ clubs sprung up all over the country, with many leisure and sports clubs having Scalextric track layouts.

The hobby took off in a big way when commercial raceways opened in the mid 1960s. Pix Raceways was located in Johannesburg, but the most impressive of all was Miniways, located on Cape Town’s foreshore. Miniways had three huge eight lane AMF tracks; a 155′ Blue King, a 110′ Orange Monarch and a 90′ Black Prince. There was also a second raceway in Cape Town, located in Sea Point. The raceway sold vast inventories of cars, controllers and spare parts. Around 1969, by which time the worldwide slot racing boom was already over, the raceways closed down.

1/32nd scale clubs, many with wooden routed tracks, were however the mainstay of slot racing in South Africa. Cars were mainly scratch-built by enthusiasts, building their own chassis from brass and steel rod and tuning their own motors.

The Ecurie Elite Model Racing Car Club (EEMRCC), founded in 1963 and still active today, hosted national events even before the formation of SAMCA. Clubs in the Eastern Cape and Durban were the main instigators of the creation of SAMCA, resulting in the standardisation of rules and regulations. The first SAMCA sanctioned national event was held in 1966, at the Aberaz club in Port Elizabeth, with the second round held at the Ecurie Elite club in Durban.

There were SAMCA affiliated clubs in Pretoria, Johannesburg, Kroonstad, Port Elizabeth, East London, Newcastle, Stilfontein, Pietermaritzburg, Durban and elsewhere, including in Rhodesia (Zimbabwe) and South West Africa (Namibia). In the 1970s, it was not uncommon to have 60 to 80 entries at a SAMCA national event.

In those days, the South African National Championship was contested over four rounds, at four different tracks each year, with a driver’s best three results counting towards the championship. Between 1966 and 1970, there were two to three classes of cars raced and from 1971, a single class of car. Since 1971, the person who finished first in the points table in the Open Class was considered the South African Champion. Sometime after the mid 1990s, multiple classes and multiple championships were introduced.

Slot racing at a national level in South Africa has always been extremely competitive; in order to even things out, drivers were graded into three classes – A, B and C – depending upon ability and experience, with a national title bestowed upon the winner of each of the classes. The SA National Champion title was awarded to the overall winner in Open Class, regardless of driver grading. 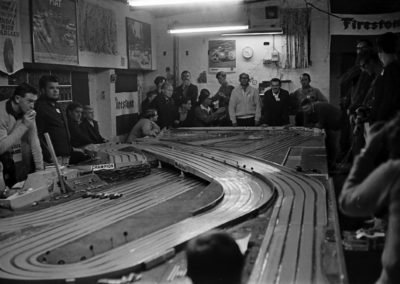 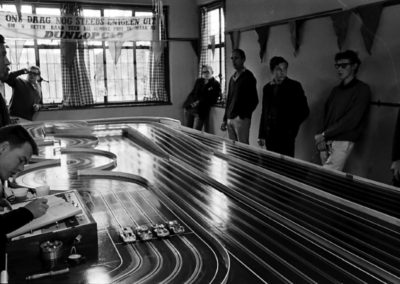 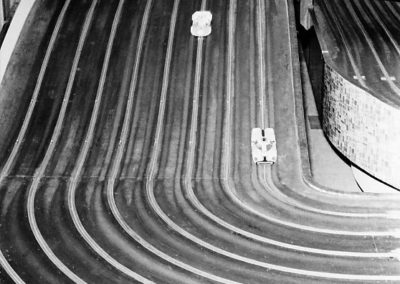 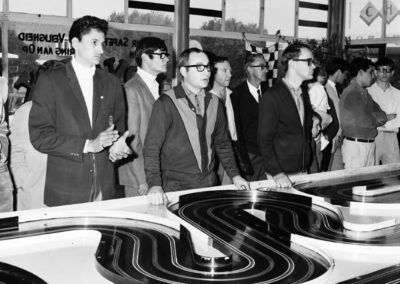 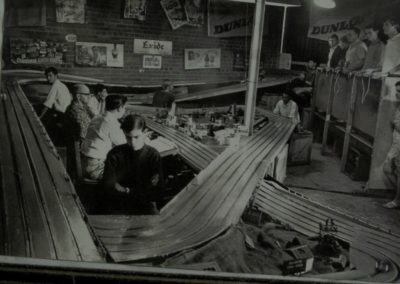 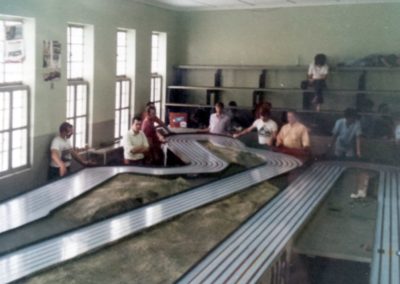 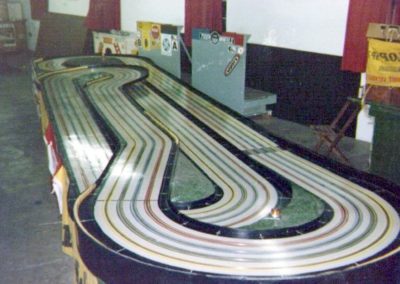 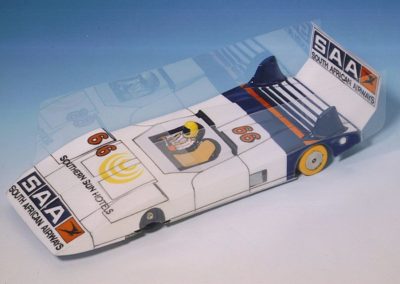 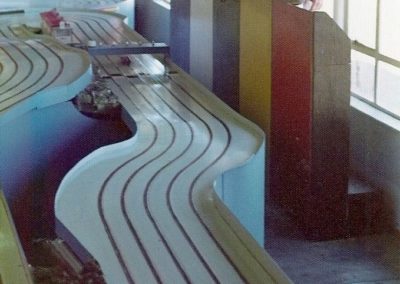 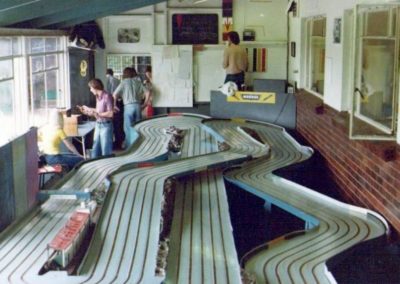 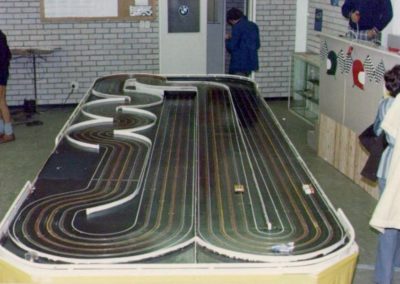 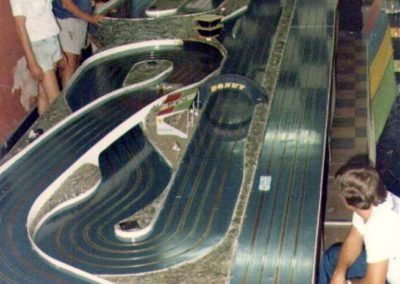 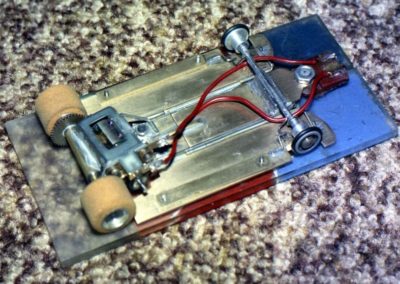 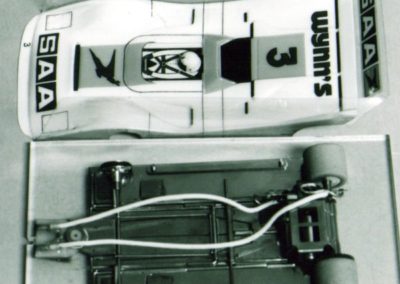 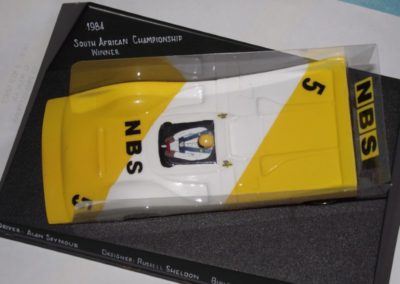 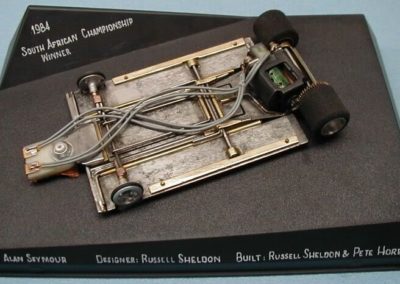 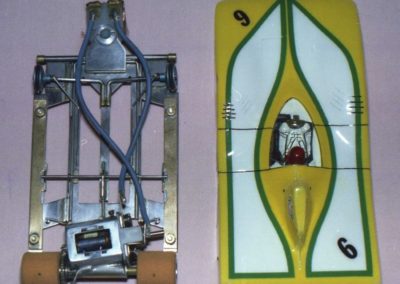 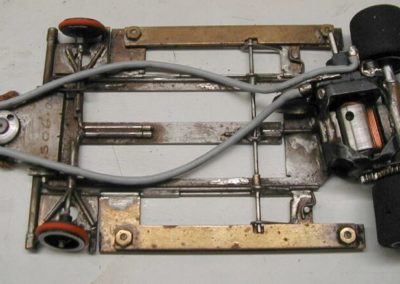 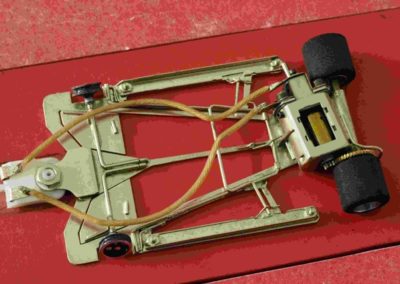 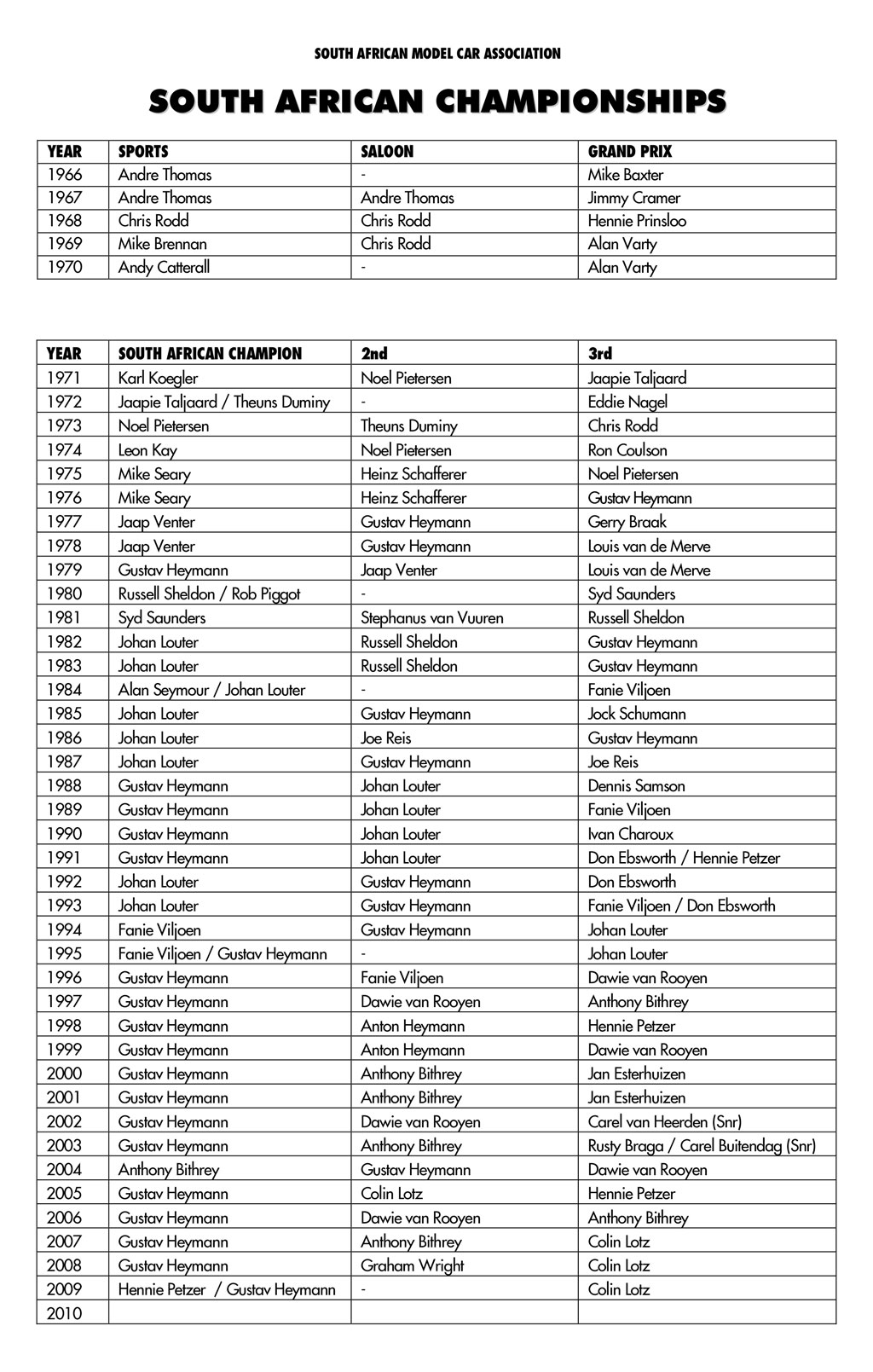