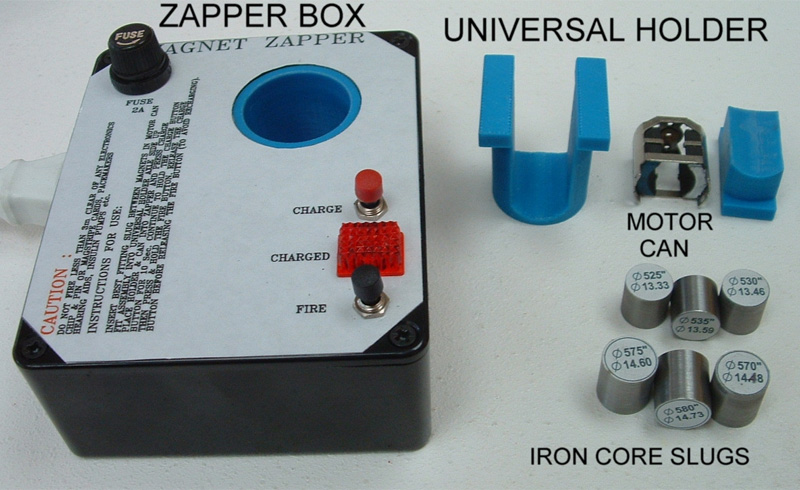 I have tested this on magnets up to 1,350 Gauss (Cahoza C-can magnets).

Fit motor can with best fitting iron slug into the universal holder vis : 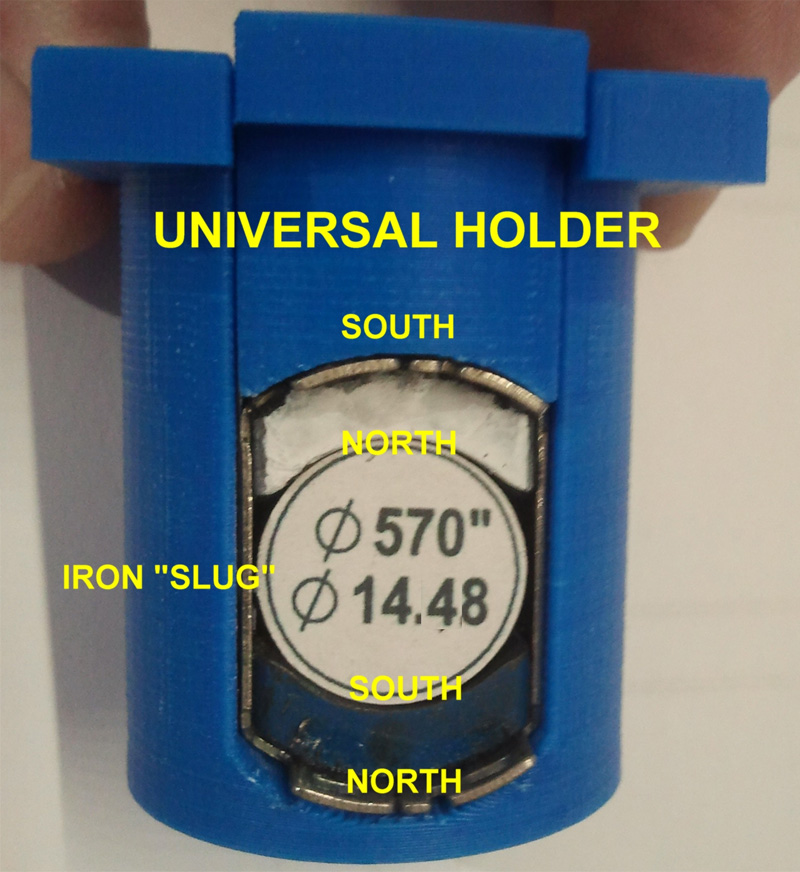 Note: This should be the normal orientation of the motor’s magnetic field – the white magnet is usually on the axle cut out side of the can.

If zapped without the core plug, you will demagnetise the magnets as well as running the risk of actually breaking the magnets. (They can fly together so violently they shatter.)

Do not use zapper over a metal surface or metal workbench.

(Don’t forget the core slug – its missing in the photo below.) 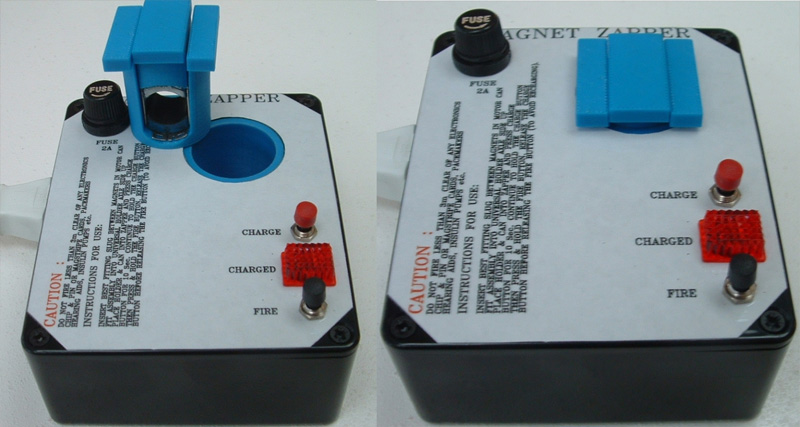 Although shown “square” in the photo, the angular orientation of the holder is irrelevant as the pulsed field is oriented straight up & down.

Press lightly down on the holder to prevent it jumping (it won’t jump out but it will move – so just hold it down with light finger pressure).

Have a final check for sensitive equipment and rubberneckers (The idiot with digital camera going for close up shot, your wrist watch, the USB stick around your neck, your expensive Gauss meter lying next to the zapper etc.

Whilst still holding the “Charge” button, press the “Fire” button and hold firmly – there will be the click of the relay as well as a substantial electromechanical thump from the magnetic pulse.

Release the “Charge” button before releasing the “Fire” button – this ensures you do not recharge the capacitors.

You can release the “Charge” button before pressing “fire” but remember the neon light will begin draining down the charge so don’t wait too long.

Note: In order to “Fire” the zapper must be connected to the mains in order to operate the relay – so press “Fire” before disconnecting the zapper from the mains.

Don’t open the zapper when charged – discharge by pressing “fire” (usual cautions) prior to unplugging from the mains. It can be fired empty without problems.

Note: The neon light will drain the capacitors down to about 100V in 10-15 minutes – the remaining 100V will drain down very slowly (days) so that can still shock you – discharge zapper before opening box and observe safety precautions outlined above. Just because the Neon light is out doesn’t mean the capacitors are fully discharged.

It is common practice to deliberately reverse Zap magnets prior to a forward zap as a means of increasing strength and alignment.

This strange phenomenon is because slightly misaligned crystals of the magnet may not realign when zapped – but align nicely when completely reversed. (They sort of spring back – like bending a wire slightly – accomplishes nothing – as it simply springs back.)

Gauss refers to the strength of the magnetic field produced by a magnet – it’s magnetic flux density.

Note: Although still widely used the term Gauss has been replaced in the SI system with Tesla where 1G =1×10-4T

As pointed out, after zapping a magnet will almost certainly be saturated and therefore at its strongest.

What we are concerned with is are our magnets a matching pair and are they stronger or weaker than what we normally use, or are they better / worse after zapping etc. etc.

In other words, we only need a comparative value rather than an exact scientific result.

Keep matched pairs together – two magnets in a motor are almost certainly made from the same batch of mixed powders and were probably zapped as a pair. The same would not hold true for magnets made years apart.

We might find a range of values and after zapping. Re-match those that most closely match each other.

Now we can try a range from weaker to stronger to see which produce the best results on a given armature – remember that a given “wind” will perform optimally within a certain strength of field – stronger does not necessarily produce better results.

Magnet Zappers Should Not Be Used Near Electronic Apparatus, Memory Storage Devices or PERSONS WITH PACEMAKERS or hearing aids. The EMP (electromagnetic pulse) given off when the Zapper is fired is potentially hazardous.

Remove your digital watch, mobile phone, I-Pad, magstrip or chip and pin credit cards to a safe distance – typically more than 3m away preferably behind a steel shield.

A final caution – follow the Zapper’s instructions as to pole orientation – if you put your magnets in the “wrong” way around their field will be reversed (and the motor will then run the other way). If you do this, correct by re-zapping twice the right way around – as one zap may not fully coerce (although it should) the field reversal – similarly if you elect to keep the accidental reversal you should also zap it a second time for the same reason. See comments on deliberate reverse Zapping later.

To periodically test your zapper – reverse zap a set of magnets – the zapper should always be able to accomplish a complete field reversal – if not something has gone wrong.

None-Pulse rated capacitors may fail suddenly to open circuit – the loss of one  capacitor will reduce the available power to below minimum.

Similarly a capacitor may fail short circuit (or low resistance) which will prevent charging of the other capacitors. This should be obvious if you press “Charge” and the “Charged” lamp fails to light (short circuit) or dims rapidly on releasing the “Charge” button (before pressing the :Fire” button). If the charged light won’t illuminate (possible short circuit) don’t go holding the charge button down for longer than 10 seconds – it won’t fix it and it will overheat the surge resistor which may well melt the lid of the box to which it is glued. The surge resistor is rated for 5W but under short conditions it will produce 100W and get very hot very quickly.

The relay contacts are rated for 12A x 2 but our inrush current is in the order of 125A – this is not as bad as it sounds as it is well within the “fault” current rating of the relay and closing on a fault is nowhere near as bad as opening – but the contacts do take a beating and the relay can fail.

Note: If you don’t press the “Fire” button for long enough to drain the capacitors (this is only 2 milliseconds so it would almost certainly be accidental) the contacts opening under fault condition will draw a D.C. arc which will burn the contacts.

Don’t worry, it won’t cause instant failure but the effects are cumulative and to be avoided hence the earlier caution that you should press the “Fire” button firmly.